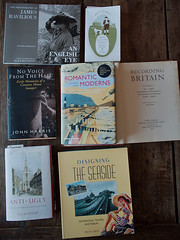 A busy week for our local delivery services. (Still, at least one of them was a slim paperback with a shipping cost 280 times greater than its sale price.)

Half of these were the result of browsing a single post from the illustrious Quad Royal blog. Praise be for the easy availability of used and discounted books online, and let’s be grateful that at least this little spree didn’t involve the gorgeous but often pricey vintage posters that are the usual currency of that site. 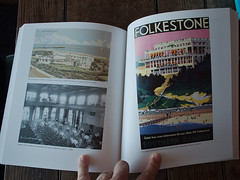 Aside from those, Designing the Seaside is a hefty paperback tome with glossy pages and plenty of colour images that covers the entire panoply of seaside architecture and fixed emphemera, including hotels, piers, shelters, pools and anything else that’s become heavily blurred by many, many coats of white or pale blue paint over salt-induced rust. 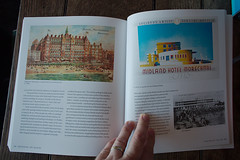 Naturally, you get a good sampling of classic travel posters. Author Fred Gray has made a comprehensive, scholarly study of his subject with plenty of well chosen case studies (including the freeze-framed gradual collapse of Brighton’s West Pier), but the text remains readable and the picture selection will keep you turning the pages.

“James Ravilious’s great arcadian elegy of Devon is surely one of photography’s great accomplishments, a monument like August Sander’s People of the 20th Century or Eugene Atget’s Paris streets. It stands as a collective masterpiece and a high water mark, like the string quartets of Haydn or Ella Fitzgerald’s songbooks in music.”
- Mike Johnston, The Online Photographer 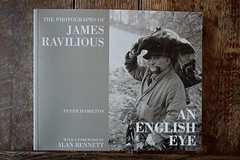 However, my best find was this copy of the James Ravilious monograph, An English Eye. As you might guess from that distinctive surname, James was the son of the artist Eric Ravilious; in fact, he even tried to adopt an assumed name on applying to art school to avoid the presumptions that came with the family one (but was recognised at the interview). More interestingly, the notable mid-century English photographer Edwin Smith and his wife Olive Cook were family friends and, although Ravilious did not pursue photography until after Smith’s death, he shares the latter’s intuitive understanding of the cadences of the black and white image. 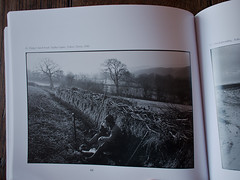 The photographs highlight an overlooked area of the nation and a way of life that was fast disappearing even as James Ravilious meticulously documented it. As well as a fine selection of his work, drawn mainly from his roving brief across North Devon but extending into the continent, you get some interesting essays covering his life and techniques. 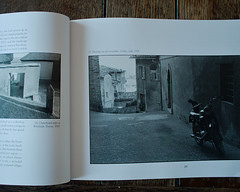 Recommended to anyone with an appreciation for strong monochrome photojournalism or an interest in the byeways of 20th Century Britain. Publisher Bardwell Press is currently selling off the remaining copies of this book for a hundred pounds a pop, but I found one via Blackwell’s for a bit less than the original RRP - a steal at less than a fifth of the going rate. (Unfortunately, they’ve since reverted to the publisher’s mark-up.) Worth a look to see if any other booksellers have yet to update their price stickers.

If you’re disappointed at missing out on this, let me direct you instead towards the recent RIBA reprint of Evocations of Place: The Photography of Edwin Smith, a fine alternative that’s still easily obtainable at retail.

(Images shown remain the copyright of their respective owners.)

« My whereabouts Ansible: multiple values in a registered variable »